Walter Bain is the self-appointed dictator of the tenement at 13 Oldberry Road in Glasgow’s cosmopolitan West End. For 35 years Walter has imposed his self-styled ‘family values’ upon his neighbours with rosters for cleaning the stairs, a regimented order on noise, and timetables for the movement of wheelie bins. While most of his neighbours appreciate that there needs to be co-operation so that the flats stay in good order, it is Walter’s bombastic approach that rubs everyone up the wrong way. Even the police and council are not exempt from Walter’s badgering with his persistent nuisance calls. Walter is like a terrier with a bone and no one is capable of standing up to his relentless tyranny. So when Walter is found dead everyone breathes a sigh of relief.

The novel follows the back stories of each of the neighbours whose lives have been dramatically affected, or ruined, by Walter Bain. Told in a variety of ways, including diary form, the reader learns about the main suspects and how Walter Bain’s bullying grinds everyone down, what he is capable of, and ultimately his lack of humanity. In fact, none of the main suspects has reason not to kill Walter Bain.

This isn’t the usual ‘whodunnit’ with clues scattered throughout. It is more of an exploration of the true character of the dead man and the main suspects, what has led up to his death and why those around him are glad to see the back of him. It comes as no surprise when the killer is revealed. The only real question is why no one bumped him off sooner.

It is probably not a book for those who like the more formulaic crime novels but written with a dry sense of humour, Close Quarters has a cosy, farcical, stage-like quality that I really enjoyed. I found it funny and poignant. 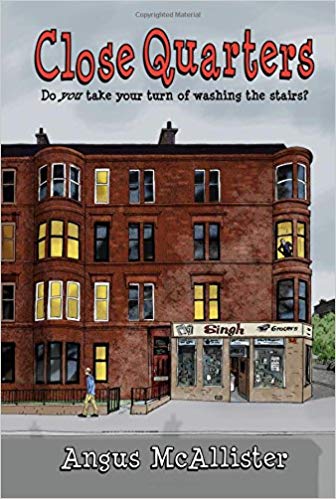